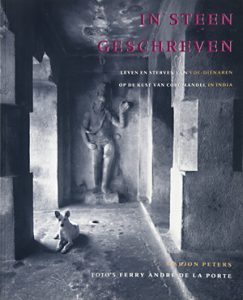 In the virtually forgotten little town of Pulicat on the east coast of India a variety of VOC heritage is still to be found. Between 1610 and 1690 the fortress Geldria was the headquarters of the lucrative textile trade on the Coromandel Coast. Nowadays two cemeteries form the most striking heritage. The old Buitenkerkhof, also called Portugese cemetery, where people from all walks of life were buried without distinction, and the Binnenkerkhof (inner churchyard), founded exclusively for the higher ranking VOC officials in 1656. The latter is under the protection of the Archeological Survey of India; it is walled and is in a reasonably good state of repair. The Portuguese cemetery, which is the subject of this article, however, suffered badly from vandalism, indifference and demolition and was completely concealed from view by profusely growing bushes. The first author (Schiebroek), who arrived as a charity worker in Pulicat in 1993, was intrigued by the history of this town. He learned about its existence from a map in the National Archives in The Hague. He undertook a plan to rescue the cemetery and a Dutch firm of contractors made a considerable amount of money available for the restoration.

In the award-winning book In steen geschreven (‘Written in Stone. Life and death of VOC-servants at the Coast of Coromandel in India’) by Marion Peters and photographer Ferry André de la Porte, partly dealing with the disappearing VOC heritage in India, all these graves and monuments were photographed and described. Although they were in an utterly deplorable condition, Dutch government institutions like the Department for the Preservation of Monuments and Historic Buildings unfortunately saw no reason to interfere. Schiebroek’s request for approval of the restoration by the Indian authorities was ignored. When after a few years’ waiting the ‘Stichting Thomas Bouwprojecten’ had a good contractor in Pulicat execute a school and toilet building, he seized the opportunity to realise the restoration plan at the same time. This work was completed in 2001. The surrounding wall on the preserved foundation was built up again and the plinths of 22 tombstones were repaired or replaced. Thus chance private initiative has rescued at least one monument from the VOC past from final ruin.